These 10 Fine Art portraits are the ones that I find myself sharing again and again on social media. They cause me to pause for a moment and smile when I walk past them in one of my galleries or when I flip through one of my Fine Art coffee table books. Not because of the photographs themselves but because the images pull me into my memories of the incredible encounters I had with each of the people in these photos.

From my muse and friend, Madame Xong to the sweet-spirited An Phuoc, I’ve been lucky enough to gather portraits as well as lifelong friendships. In this article, I will explain exactly why these particular Fine Art portraits are my favorites through my experiences with each subject.

I can truly say that the art of taking portraits completely changed my perception of humanity. Each person I’ve met has allowed me a glimpse of their story, however, briefly. From the complex heritage of Vietnam’s ethnic groups to the storied history of Cuba’s cigar culture to the colorful spirit of India, it’s been a gift to see the world through the eyes of so many different people and countries.

The Stories Behind the Portraits 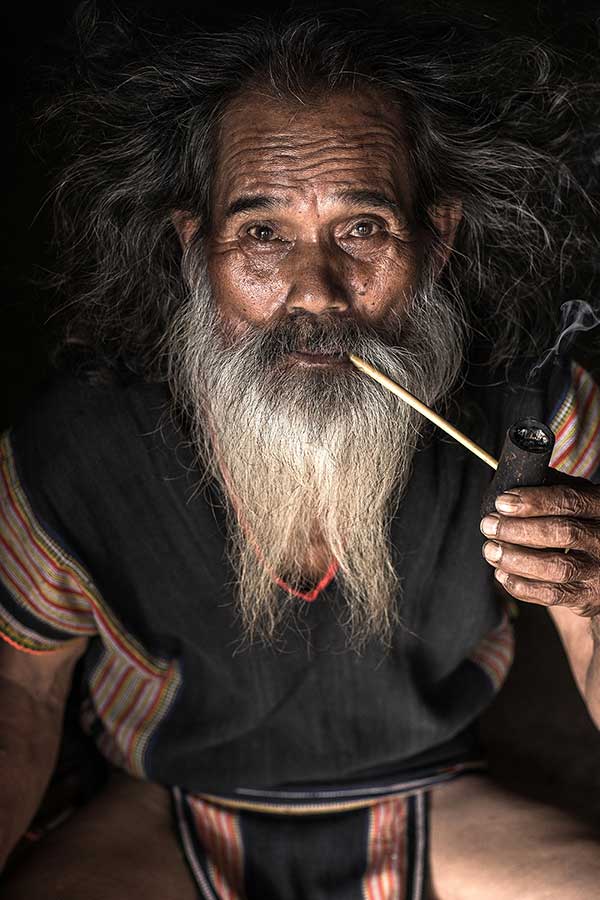 I took this portrait of A Dip, a 76-year-old To Dra elder, while I was researching my Precious Heritage Project. When I met A Dip he was wearing this beautiful handmade costume. Amongst Vietnam’s ethnic groups, it’s rare to see a male costume with such detail. I approached this gentleman to explain the concept behind The Precious Heritage Museum and to find out if he would sit for the portrait. He accepted with pleasure, explaining that his costume, the last one in existence, is his most precious possession because he wears it to church every Sunday. I later learned, on subsequent visits to his village, that A Dip is the last person in his area who can still make a traditional To Dra bamboo basket and play his ethnic group’s musical instruments. His artisanal skills represent a tangible part of the To Dra people’s cultural heritage. 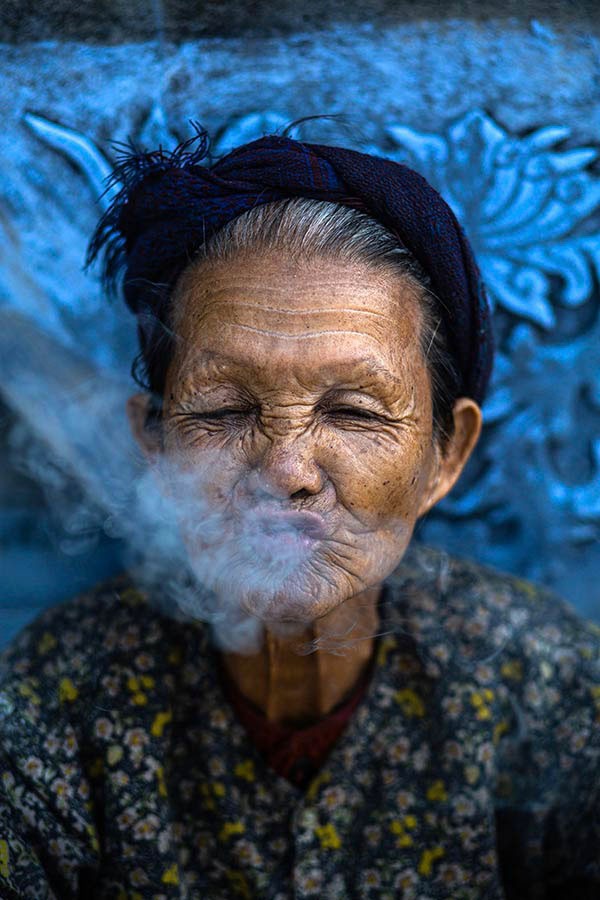 I met Ba Sau in Hoi An, Vietnam where I live. One thing I love about Hoi An is that it truly has the atmosphere of a small village. As I wander around with my camera, I often stop and chat with people I know by sight. I noticed Ba Sau smoking a pipe and loved the way the smoke created a mystical atmosphere around her face. When I stopped to talk to her, I learned that her real name is Hanh but she’s been called Sau (six) since she was a kid because she’s the 5th child in her family. (In Vietnam, the firstborn child is often called Hai, which means second.) Ba Sau laughed as she told her story. I asked her what kept her so joyful. “Singing!” she replied.

She’d been an ice cream vendor in her youth and loved singing out descriptions of her wares to passersby. She still sings with her neighbors.

I met Arzu in 2014 when she was just 10 years old. She was doing magic tricks in a square in Jaipur, India. I couldn’t help but notice her as I walked by because of her bright green eyes. I wondered where she was from and what she might be thinking. She shyly accepted my request to take her portrait. I returned to Jaipur several years later and was able to seek her out. Since the last time I’d met her she’d grown into a young woman and had gotten married. Her eyes were still as brilliant and mysterious as ever.

I met this “Krishna” child and his older brother as they floated down the Ganges River in Varanasi, India. Many children in India love dressing like the Hindu god of compassion – Krishna. A popular cartoon of Krishna as a child has given this important deity a new heroic role amongst India’s youth.

The children were very quiet and calm as I took their portraits, quite different from the exuberant energy of most children that I know in Europe or Vietnam. It was incredible to see their stoic little faces get transformed by the artist into blue sapphires with dots of white and ruby red (the sacred colors of the Hindu god.) I’ve stayed in contact with little Krishna and his family and have made them a part of my Giving Back project.

This Fine Art photograph, “Laughing Time” was one of my earliest portraits in 2013. It always reminds me of how important it is to have spontaneity as a portrait photographer. I was in a market in Meo Vac, Northern Vietnam shooting some portraits of kids when I noticed this striking Hmong woman smoking her traditional pipe. On a whim, I asked her if she could make some more smoke and I captured her deep laugh at just the right moment. I returned to visit her in 2019 and found her to be just as charming as during our initial encounter.

I met this dapper 85-year-old gentleman on one of my yearly photographic trips to Cuba. I instantly loved his style with his cool Cuban pink shirt and Canotier hat. Little did I know when I noticed Daniel and asked if he would like to smoke a cigar together that we would have a shared love of Vietnam! It turned out that he had been to Vietnam in 1975 with Fidel Castro for an engineering project and that he’d fallen in love with the country. Talk about the power of serendipity! I always make time to have a long dinner with Daniel to catch up each time I return to Cuba.

There’s just something that makes one want to get to know this fiery Cuban woman with her bright red floral wreath atop her head. At least that’s how I felt when I walked past Elva in Havana, Cuba. There was something about her that instantly reminded me of the Mexican artist Frida Kahlo. We ended up sharing a Cohiba Esplendido cigar and talking for hours. I returned to visit her several times on subsequent visits to Havana. This Fine Art portrait has been published all over the world and remains one of my most well-known photographs.

This portrait of little Kim Luan from the Mnong tribe in Central Vietnam and her elephant is one of my favorites because it shows the gentleness that can exist between animals and humans. I have visited and documented the traditions of the Mnong ethnic groups numerous times over the years and I find their connection to their natural environment to be particularly inspiring. I’ve had the pleasure of visiting Kim Luan and her family many times and have seen her grow from a sweet child of 6 years old to an adolescent of 13! Best Friends V has been published in many international magazines such as National Geographic, Conde Naste Traveller, and Marie Claire among others.

The gentle expression and striking blue eyes of An Phuoc are what initially prompted me to ask for a portrait of this little Cham girl from the Ninh Thuan province in Vietnam. Yet, it is my continued friendship with An Phuoc and her family and the memories of our many dinners togethers that makes me smile each time I see this photograph. She and her sister Sapa were part of the initial inspiration for my Giving Back project. This Fine Art portrait has become one of my most famous photographs and has been published in media all over the world.

I can truly credit Madame Xong with launching my career. She has become my muse and one of my closest friends in Hoi An, Vietnam. I met her when I happened to take a ride on her tour boat. Her puckish sense of humor and kind demeanor inspired me to shoot a few close-up photos of her face. This serendipitous image of Madame Xong’s “Hidden Smile” eventually became my most well-known photo. It’s been published in more than 500 articles, magazines, and tv spots. It’s also in the permanent collections of the Hanoi Women’s Museum and The Asian Museum in Havana, Cuba.

“Hidden Smile” was chosen to represent the friendship between France and Vietnam during a ceremony to celebrate 45 years of diplomatic relations. Vietnam’s Secretary of the Party, Nguyen Phu Trong, who has since become the President of Vietnam, gifted Réhahn’s portrait “Madam Xong” to French President Emmanuel Macron. (See the video of the ceremony)

The unforgettable Madame Xong loves the attention she’s received from her famous picture, yet, she continues to captain her tour boat, a job she truly loves. By chance, we have the same birthday in May, which we celebrate together each year. 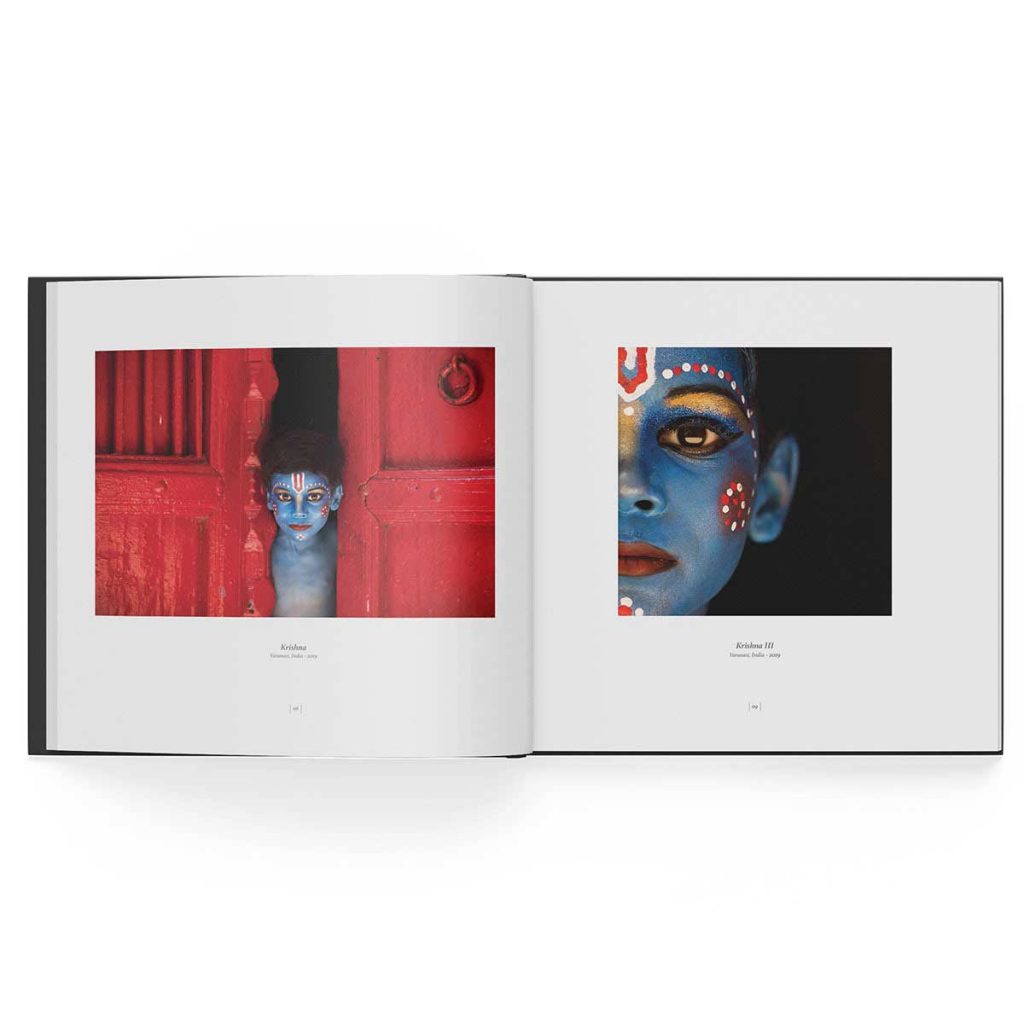 An astonishing collection of the artist’s most celebrated photographs. The ones that captured the attention of the world, making headlines in the international press and rising to the status of Iconic. This collection goes beyond borders and languages to journey directly into the heart of humanity, taking daily life into the realm of the extraordinary. Each photograph is accompanied simply by a title and location, allowing viewers to find their own meaning in the image through the lines on the subjects’ faces and the emotion in their eyes.

| ORDER THIS BOOK
PrevPrevious
Next Next