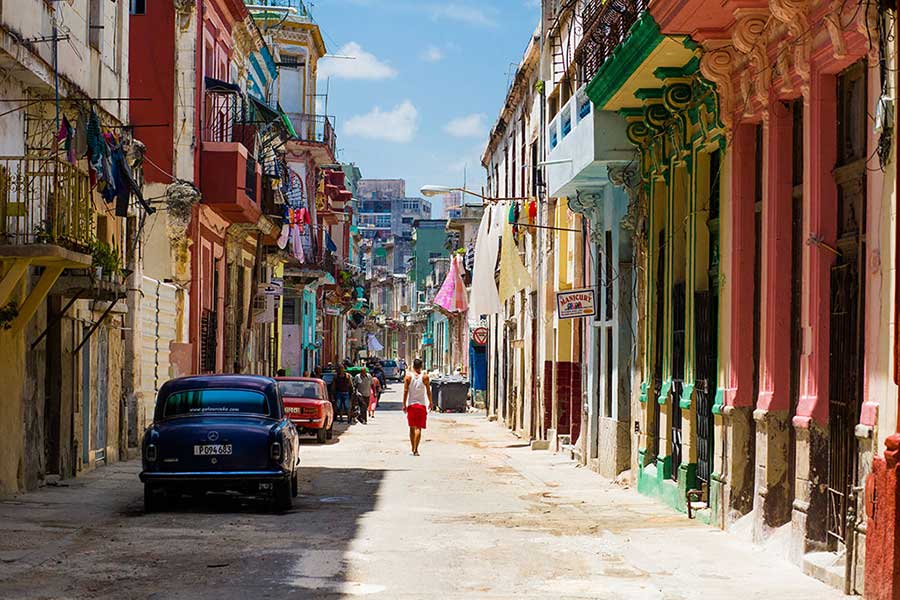 Réhahn returns to Havana yearly to see friends, smoke cigars in La Casa del Habano, and photograph Cuba’s coolest characters. These are the stories behind the famous portraits as well as a travelogue about one of the places dearest to Réhahn’s heart.

In Havana, the present seems to rush right through the middle of history. Amongst the 1950s Chryslers and icons of communism from times past, there is the pulsing energy.

Kennedy and Castro. Classic Cars and Cohibas. Cigar smoke swirling lazily out of cafes, scenting the air with their odor of burnt coffee.

I spot an old propaganda poster plastered to a crumbling pink facade. Che’s iconic face glares out at the beach resort advertisements on the building across the street. This is Cuba as I see it for the first time from the back of my new friend Edel’s car. We cruise down boulevards past old buildings and kids playing football in the streets to get out of town. A few beats of Son de la Ma Teodora escape from a doorway as we pass. 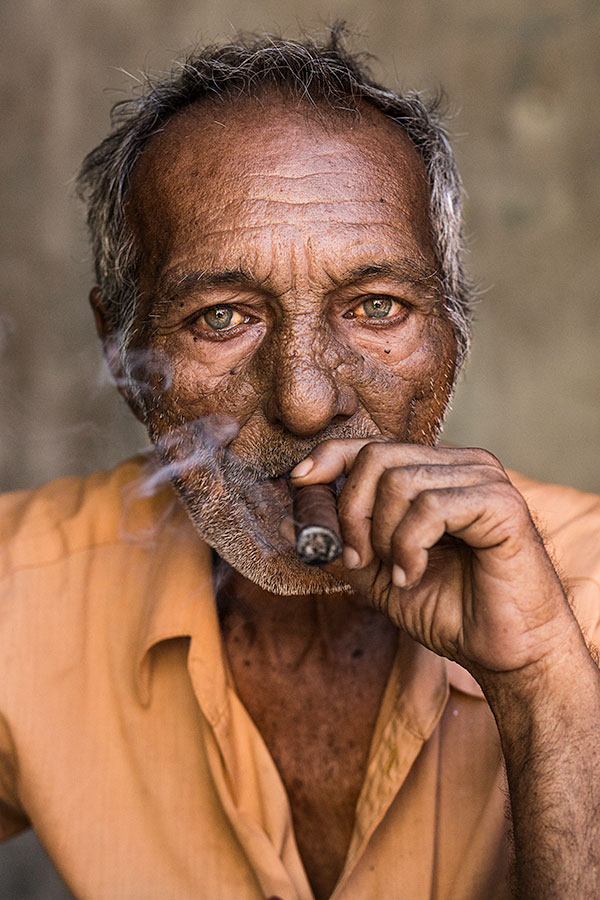 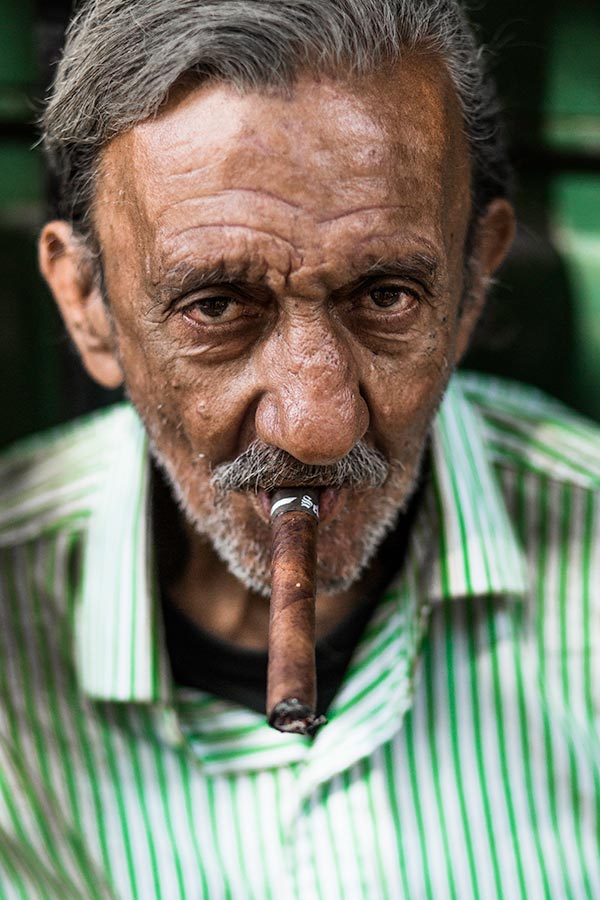 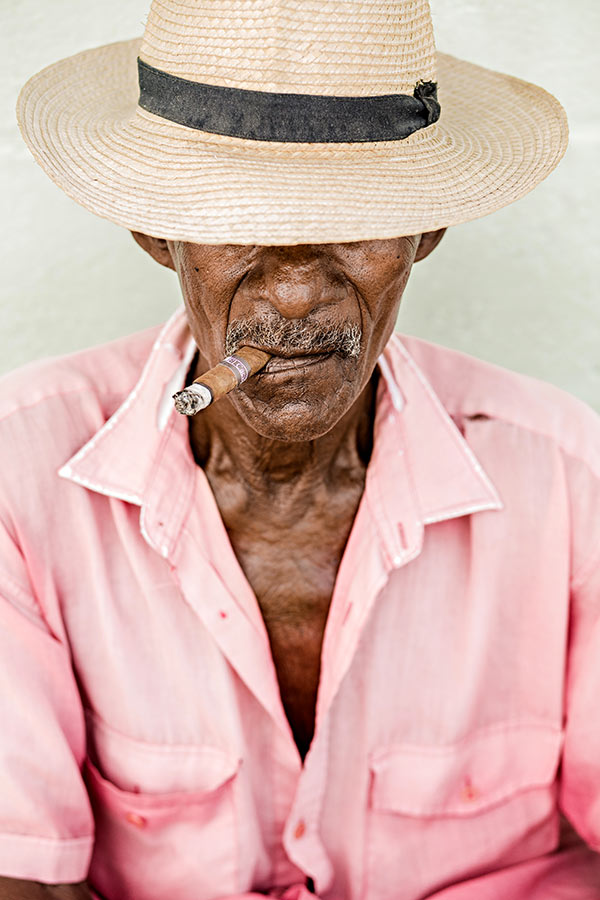 I traveled to Cuba for the first time in 2007. I was drawn to learn more about the history of this country that was on the brink of a new era. Edel happened to show up when I called for an English-speaking driver at my hotel. Jovial, philosophical, and knowledgeable about everything from geopolitics to agriculture, Edel was the perfect traveling companion.

On that first meeting, I asked Edel to take me to the countryside. He was used to tourists asking to be shuttled around to Varadero to see the beautiful beaches. But I was looking for something more authentic—a trip outside the tourist zones and into the real Cuba.

Edel asked if I smoked cigars. At this point, I’d never smoked one in my life, but I accepted without hesitation. What better way to experience Cuba than to share one of its most ancient rituals with a new friend? 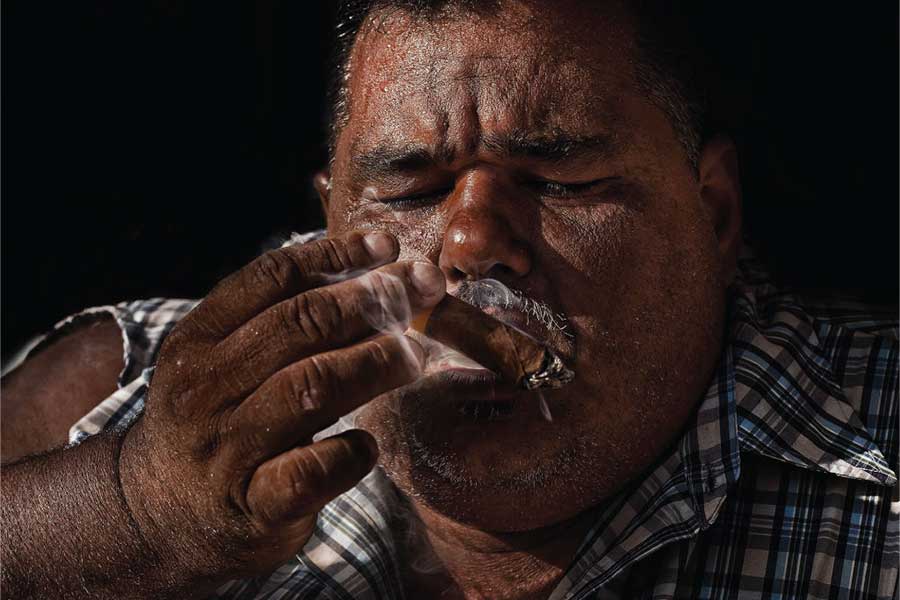 He stepped out of the car and pulled a box of unbranded cigars out of the trunk. They were humble and hand-rolled, made from tobacco grown by local farmers. He taught me how to hold in the smoke without fully inhaling. Then, in a way that I would come to know as utterly Cuban, he got philosophical. He explained the ritual of smoking to me as one might discuss the nuances of poetry.

Since that first trip, I’ve been back 15 times to see Edel and to photograph the country. In 2011, I bought him a house so that he could take care of his disintegrating health due to diabetes complications. Each time I see him, we share our stories and cigars, letting the time pass slowly. 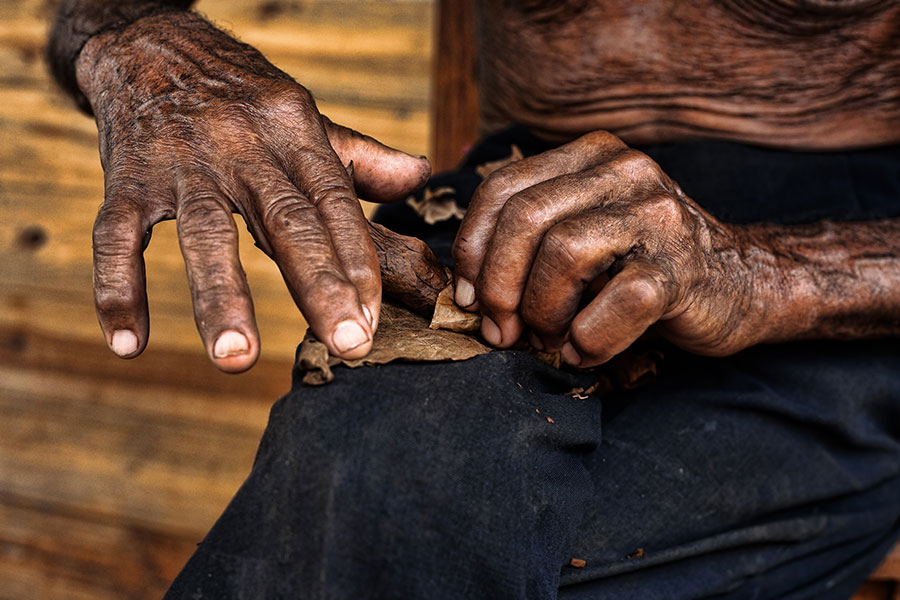 THE ART OF CUBAN CIGAR SMOKING

True lovers of cigars don’t smoke them to show off. They smoke them to feel good. Smoking a cigar for a Cuban has the same importance as savoring a glass of Bordeaux does for the French.

It’s a rewarding moment after a long day, a moment to chill and enjoy the good things in life. The enjoyment is also wrapped up in a feeling of pride for the bounty of their country and their heritage.

I smoked my first cigar, and then later that day, I smoked another. The first one was strong enough to make my head spin. By the second, I started to get used to the rich intensity of the smoke and to truly enjoy it. I’ve moved on to the elegant Cohibas now. I buy boxes to smoke while in Cuba and to bring back to Vietnam. Cohibas are crafted with care and pride. Each cigar goes through approximately 222 stages during the production process before it is ready for distribution. The flavor draws me to the brand, but I also love being a part of the myth that surrounds them.

A BRIEF HISTORY OF COHIBA

In 1966, 4 years after the Cuban Missile Crisis was averted, Fidel Castro’s bodyguard offered him a cigar. It was unbranded and made with the finest Cuban tobacco. Castro enjoyed the blend so much that he decided to create a limited production for high-level officials and diplomats. He named them Cohiba, which is the Taino name for a cigarette. The Tainos were indigenous people from the Caribbean. They were the first people in the Americas that Christopher Columbus encountered on his expedition in 1492.

I don’t smoke Cohibas for their cult status. To me, they are an access point into the culture, a way to interact with people. Every Cuban knows their name and their history, even if they’ve never had the chance to smoke one. These cigars with their iconic yellow labels have accompanied me on so many incredible adventures. They’ve helped me meet new friends and share memories with old ones.  They are an integral part of my Cuban experience.

I met Elva during one of my early morning photographic ventures in Old Habana. She spotted me before I noticed her.

“If you want a picture, you’ll have to give me something,” she said

I hadn’t been about to take a photo; in fact, my camera wasn’t even in my hands at that moment. But as soon as she spoke, I did want to take her portrait. Here was this woman, fierce as fire, daring me to cross her. A massive wreath of red flowers crowned her head. She reminded me of what Frida Kahlo might have looked like had she lived into her seventies.

Instead of continuing on my way, I sat down next to her and gestured at her rough, oversized cigar.

“Do you really smoke those things?” I asked.

She laughed and told me it was just for tourists. “They like to take pictures of us little ladies with huge cigars,” she said. “I can’t actually afford to smoke every day.”

When I offered her a Cohiba Esplendido, she accepted with a grin. We smoked together for more than an hour talking about history and her country.

The next year when I came back to Cuba, I went to visit her. She invited me to her home, which was near La Bodeguita Del Medio, an institution famous for its traditional mojitos. She claimed it had opened the same year she was born.

To me, Elva epitomizes the Cuban spirit. She was no-nonsense on the first encounter, but once she trusted me, the door opened for a lifelong friendship. Unfortunately, she passed away a few years later. Now, every time I open a box of Cohiba Esplendidos, I think of her and her unforgettable character.

As a travel portrait photographer, I’ve voyaged all over the world. Interestingly, the more I travel, the more I realize that there are links everywhere. These human connections make the world seem like a much smaller place.

I happened to notice Daniel on one of my photographic strolls through a Cuban town that I was staying in. His pink shirt caught my eye and I liked his style. I caught up with him to ask if he would mind if I took his portrait. We ended up spending an hour chatting and smoking right there in the street.

I was surprised to learn that this dapper 85-year-old gentleman had been to Vietnam in 1975. An engineer by trade, Daniel had come to the country for 7 months to build a hotel in Hanoi. It was a gift to Vietnam by the Cuban government as a symbol of the country’s victory. Daniel was at the inauguration with none other than Fidel Castro himself.

Now, I meet up with Daniel every year to give him money from the sale of his portraits. We have dinner, enjoy a few Cohibas, and share our stories of Cuba and Vietnam. He confided in me that before he dies, he dreams of revisiting Vietnam. I remain touched by his esteem and love for the country and the Vietnamese people. 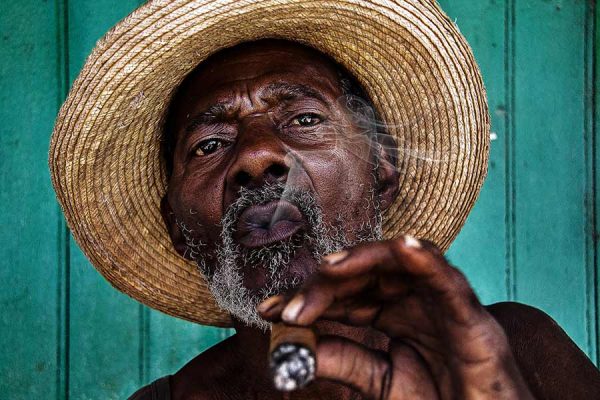 Cuba has the longest electric train in South America. It runs from the eastern shore of the Havana harbor all the way to Matanzas. I hopped on the train to see the countryside from a different angle and got off in a tiny town.

I saw a gentleman sitting on a bench in front of the perfect green wall, and I liked his face. At the time, he was smoking cigarettes, so I asked him if he would like to smoke a cigar.

“Of course, I’m Cuban,” he responded.

He told me his name was Francisco and introduced his friend Emilio. The three of us smoked together and watched the trains pass by. My portrait of Francisco shows his tough as nails exterior, which didn’t crack the whole time I spent with him. I was sad to learn that he passed away a few years later. His portrait always reminds me of the spirit of the Cuban people. 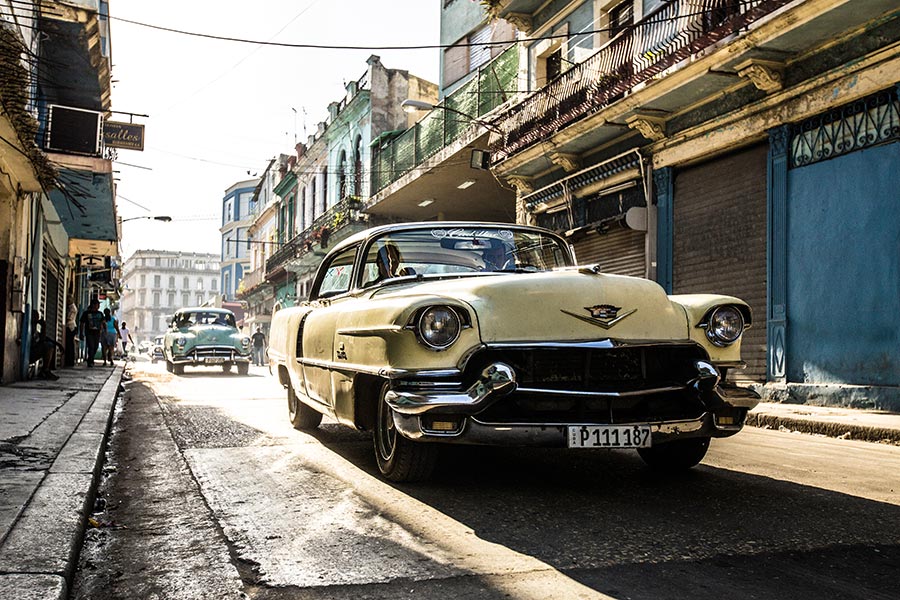 In the early mornings, when I walk in old Havana, everything seems to slow down in Cuba. Sometimes, it feels as if the time has just stopped.

My time in Cuba is not like my other photographic ventures. I don’t spend 10 hours per day chasing the light and finding subjects as I do elsewhere. I let the time come as it may. I spend a typical day waking up around 5 am to shoot when the light comes through the buildings. I keep shooting as the commerce begins to open, and people fill the cafes for their morning coffee. Afterward, I might head to El Malecón, Cuba’s most famous seaside avenue. Around 8 am, the light comes up from behind the fishermen reeling in their daily catch.

In the evenings, El Malecón becomes a promenade. Here, lovers stroll, musicians serenade passersby and people lounge along the seawall like an extension of their own homes.

La Havana is an open-air museum filled with colors that are faded but still unexpected. The old cars and crumbling balconies create rich backdrops for any subject.

There are entrances to buildings that, when I come across them, I feel as if I’m entering a secret world. The hundred years of paint layers and old tags each have a story to tell.

After a few hours of photography, I typically go to La Casa del Habano near the Hotel Nacional around 11. Sometimes, Edel comes with me, and we settle in for long conversations. We choose our cigars from the thousands available in floor to ceiling display cases in the humidor. Then, we sink into leather couches and take time to enjoy the ritual of puffing and ashing, puffing, and ashing. The light filtered through the smoke is softer, slower as I exhale and enjoy the good life in Cuba.

Like any of these photographs? Visit our Online Store and make it yours