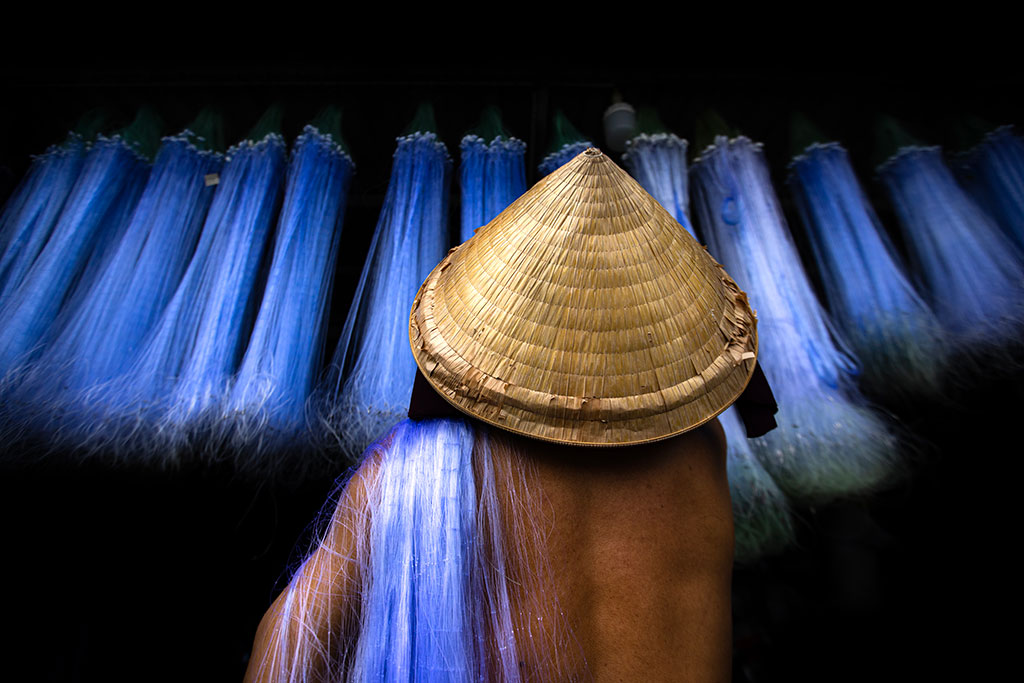 Did you know that almost half of Vietnam’s mainland borders the sea?
And if you include inland bodies of water such as lakes, waterfalls and the Mekong River, there are more than 226,000 km2 of water within Vietnam’s territory. It’s no wonder that in a country with so much water one of the oldest traditional skills in Vietnam is fishing.

The industry for both freshwater and deep sea fishing in Vietnam has grown rapidly over the last two decades. Bringing the country to be one of the five largest exporters of seafood in the world. However, the words “fishing industry” don’t sum up the cultural importance of fishing in Vietnam as well of the artistry of heritage traditions such as boat and net weaving.

In truth, Vietnam’s waterways are filled with life, vibrant energy and centuries-old traditions. Fishermen cast out in their handcrafted basket boats or small dinghies while merchants paddle boats filled to bursting with fruits for the market.

Fishing in Vietnam can be both an individual passion and a community effort.

Read on to learn more about the art of fishing in Vietnam and how scenes of life along the rivers and coastlines of Hoi An and Phu Quoc island inspired Réhahn’s Fine Art fishing photographs in Vietnam.

Where to See Traditional Fishing in Vietnam 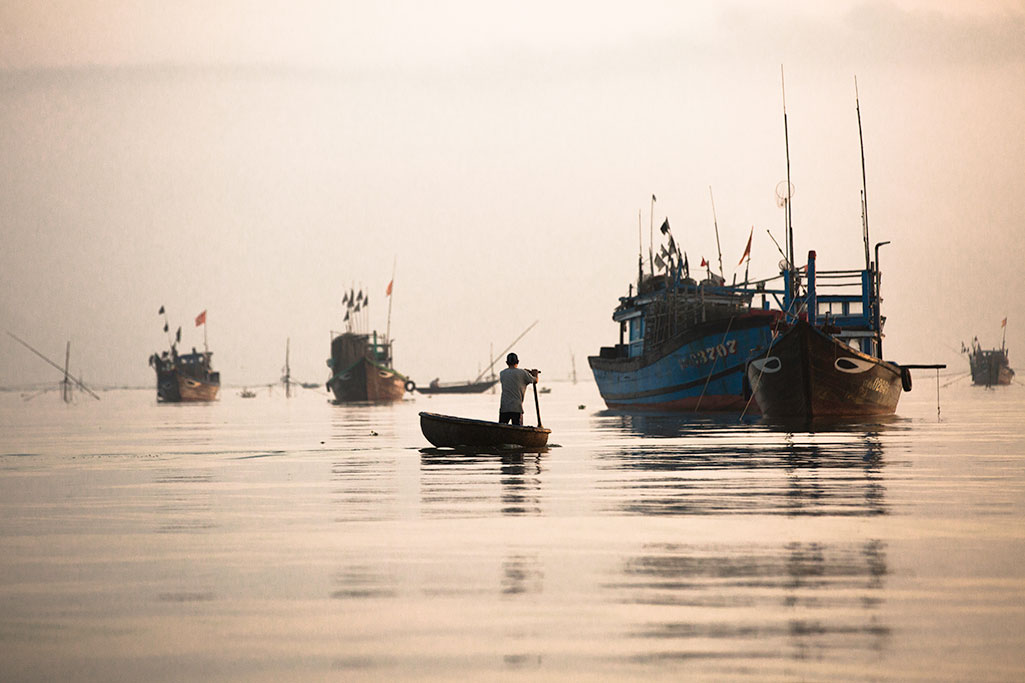 With large scale fisheries increasing on the coast, the country has become the leading exporter of black tiger shrimp as well as a strong contender for tuna, clams, mackerel and other fish. But, beyond the big industries, artisanal fishing traditions are still alive and well in Vietnam as well.

The majority of fishing vessels are small wooden boats or basket boats with hand-mended nets. But from Hoi An and Danang to Phu Quoc, it’s also common to see fishermen casting their lines into the seas and rivers and waiting for the right moment to reel them back in.

With the lack of tourism in the country over the last few years, many people have turned back to the ancient art of fishing. It takes resilience to make a living but the meditative aspect of fishing can be an incredible draw to the sport.

Fishing is above all an art of patience; the quiet bobbing of the boat as fish stream past the net, the bounty of the sea that can come and go as the fisherman waits hoping the luck will turn in his favor.

Depicting the act of fishing in art can also require reserves of patience. In Vietnam, one of the most beautiful moments to capture is the split second when the fisherman throws his or her net out to the sea at sunrise.

The water in and around Vietnam is like a kaleidoscope. It is constantly shifting colors and perspectives to create new images and inspiration for a photographer.

Hoi An, Danang, the Mekong and Red River Deltas and Phu Quoc island are some of the main fishing zones in Vietnam. Each one has its charm and particular traditions.

Fishing in Hoi An and Danang

A large part of what has made Hoi An such a desirable location over the centuries is the fact that it is surrounded by water. It has the luck of being placed along Vietnam’s central coast with the wide expanse of the ocean beyond, and the Thu Bon river running through the center of the historic town.

People from Hoi An are naturally water people. The traditional jobs in the area have evolved from this cohabitation with the sea. Traditional fishing is still one of the main industries here, with larger scale fishing happening off the coast of nearby Danang. 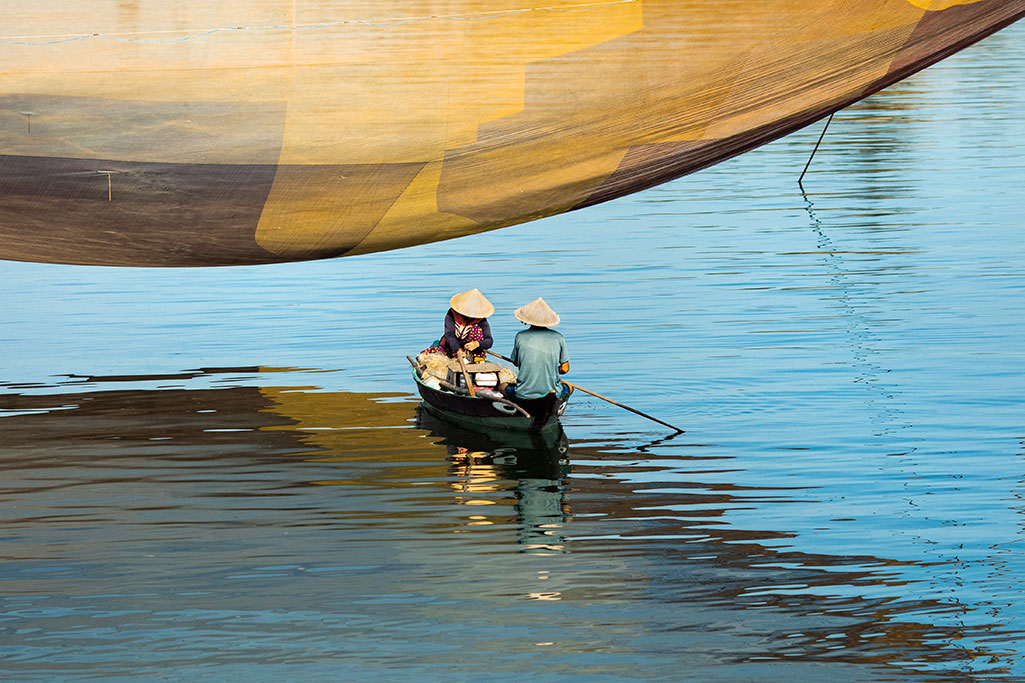 There are many different forms of fishing in Hoi An and Danang, from net fishing to line to simply wading into the tide pools to scoop up tiny shrimp.

If you visit Hoi An, wander along both the rivers and coastlines to see the ways that the different fishing traditions work. You’re likely to see basket boats floating in the sea amongst colourful sheathes of fishing net, single fishermen standing along the riverbanks calmly casting out their lines, and even entire families wading knee-deep into the shallows with handheld nets.

Réhahn grew up near the Normand coastline in France, where it is also common to see fishermen casting out in boats to try their luck. He’s always felt more at home near water. This is why so many of his photographic works revolve around the daily life on Hoi An’s waterways.

From a fisherman staring out into a tumultuous sea to the textural colors of a flooded ricefield after a storm, these are a few of Réhahn’s favorite photographs of fishermen in Hoi An.

The Fishing Industry in Phu Quoc

One of the major fishing areas in Vietnam is off the coast of Phu Quoc island. The island is dotted with 5-star resorts and luxury experiences, yet, deep down it is still an artisanal fisherman’s village – a land in harmony with the water that surrounds it.

The full beauty of the island can best be seen at dawn and dusk when the colors of the sky are reflected in the sea and the fishing boats move gently in the surf.

Vietnam’s rivers are teeming with energy. In Hoi An, they are often filled with floating prayer lanterns at night while along the Mekong Delta, there will be tourist and trade boats using the river like a thoroughfare.

There is a constantly changing mood along the Mekong as merchants sail their boats packed with fruits and flowers, dried shrimp and other merchandise. While fishermen drift past with their nets and lines.

The river deltas have a peaceful atmosphere and incredible natural beauty. Along their verdant banks, people are constantly in motion….fishing, creating artisanal handicrafts and chatting with travelers.

It’s a beautiful place to visit if you travel to Vietnam. The Mekong Delta offers a respite from the intensity of Saigon, without having to travel very far!

Traditional Symbols of Fishing in Vietnam

It’s impossible to think about fishing in Vietnam without imagining the iconic basket boats filled with nets or market wares that bob in the county’s waterways.

The baskets are known as thuyen thung in Vietnamese. Legend has it that the boats were actually created centuries ago to avoid a fishing tax. The fishermen formed the boats to look like large baskets rather than fishing vessels to avoid paying the fees. Apparently, the ruse worked because basket boats are still very prevalent in the waters throughout Vietnam.

Boat weaving can be traced back more than 13,000 years. The art of overlaying pliable strips of wood and forming them into waterproof flotation devices is pretty incredible if you think about it.

In Vietnam, the weaving is typically done with bamboo strips, which are then molded into hemispherical forms and sealed with coconut oil or fibreglass resin.

The boats can be particularly enchanting at sunrise. Merchants fill them to the brim with vibrant fruits and vegetables as they set off to one of the county’s famous floating markets. This is also the “fisherman’s hour,” when they set out in boats to reel in their nets that had been left overnight under the water. The basket boats in the early sunlight glow a burnished yellow that shines between the waves and the movement of the captain’s oars.

Réhahn’s fishing net photographs were inspired by his fascination with the way simple objects can sometimes be transformed into things of beauty or mystery. Upon first glance a fishing net is simply utilitarian. But in the right light, they seem to transform into webs of color and texture.

Many of these nets are still made by families in traditional fishing villages in Vietnam. The nets are woven in brilliant gem tones of emerald, ruby and sapphire among other shades. The colors are created out of thin plastic threads, tied together in a complicated process; much of which is still done by hand by artisans in Vietnam’s fishing villages.

A net tossed into the air can appear like a splash of color across the sky. Or a puddle of webbing can catch the colors around it like spilled oil reflecting a rainbow. Have you ever seen something at just the right moment or in just the right way so that the mundane became beautiful?

This brings us to our next section – the incredible colors that can be seen in the art of heritage fishing in Vietnam!

Colors of Fishing in Vietnam

From dawn to dusk, the light is constantly changing in Vietnam as the sky’s reflection shifts the colors of the water. Very early in the morning, when the bustle is just beginning for river and coastal workers but before tourists or wanderers start passing by, the tranquility is hard to beat. 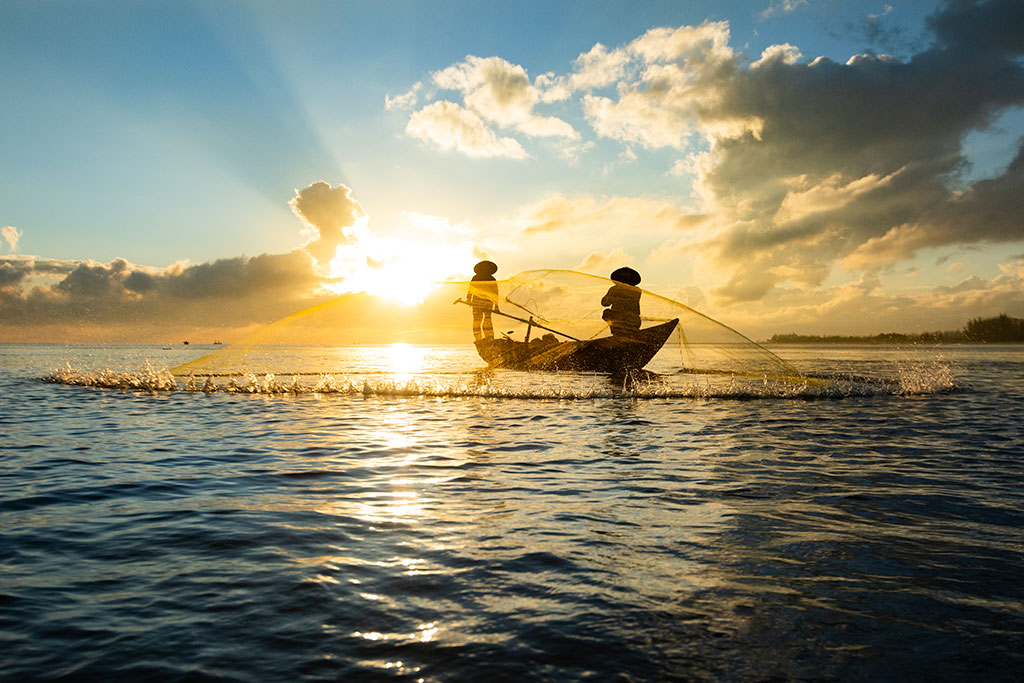 At dawn, the game begins for the fishermen to see if the day is made of luck or lack. The fishermen float out to their nets that have been dipped below the surface of the sea during the night to see if fish can be found within. With the right light, the sun’s colors spread across the water, the nets, and the translucent skin of the fish as they are hauled into the belly of the boat and back to shore.

While painters have different types of paint to play with, from oil to watercolor, gouache to acrylic, the mediums of Fine Art photographers are light and color.

The colors at sunrise on the water can be totally different from mid-afternoon and dusk. Each time of day offers a different mood and emotion. In a photograph of a fisherman on a river in Vietnam, the reflection of a sunrise on the water can create a wash of color and light while the net adds a hint of sparkle as it’s tossed towards the light. At just the right moment, the water and rising sun can create marvelous colors on the netting – orange, pink, violet, or gold.

Depending on the seasons and time of day, boats can float on waves of emerald, citrine or gold.

The actual colors of Vietnam’s nets can also shimmer in the right light. They are woven in brilliant gem tones of emerald, ruby and sapphire. The colors are created out of thin plastic threads, tied together in a complicated process; much of which is still done by hand by artisans in Vietnam’s fishing villages. The shining colors of the fishing nets transform the daily duty of fishing into a spectacular sight.

Artists have always been fascinated with the forms and colors that fishing creates. The back of a fisherman as he casts his line, for example, shows a balance between physical strength and movement, creating a composition that is never stagnant.

How much beauty and mystery can be found in the fight against the sea, the luck of catch, or the languid passing of time on a gently bobbing boat?

Painters such as Winslow Homer, Edouard Manet, and Gustave Caillebotte strove to capture this ephemeral moment when the light, the reflections, the colors of the nature and the flash of the fish all coincided perfectly. 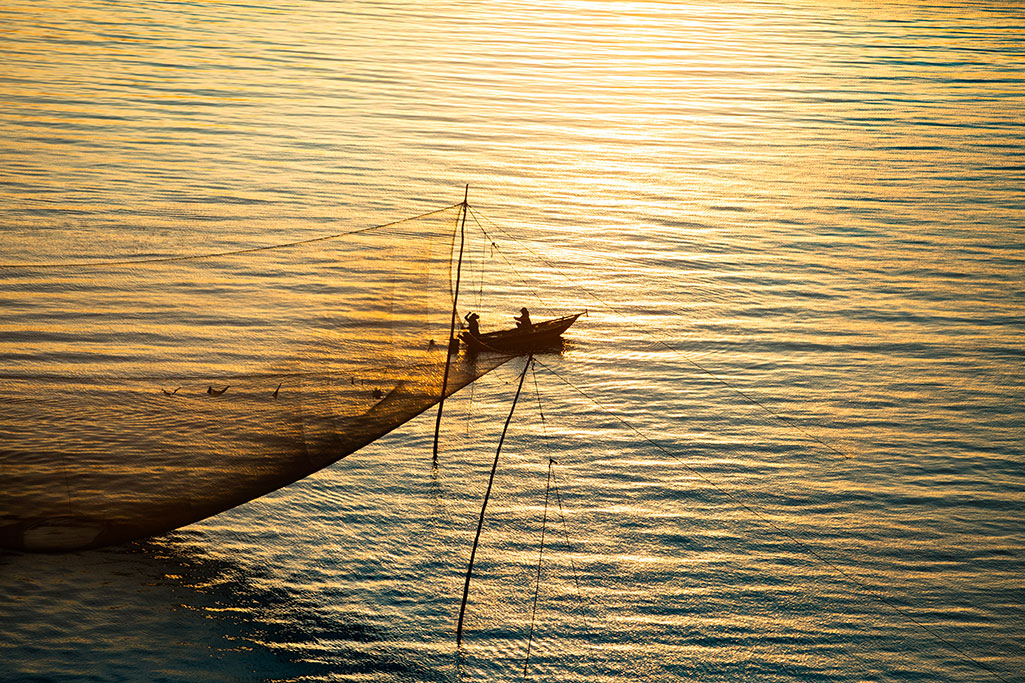 In Vietnam, each small fishing craft that sails out also has its own personality with vibrant paint jobs and gem-toned fishing nets. It is worth taking a little time during your trip to visit with the fishermen in Vietnam and to see both the difficulties and the joys.

If you enjoyed this series of photographs of traditional fishing in Vietnam, don’t hesitate to go to our online store where you can try the photos in your home with our virtual artplacer!