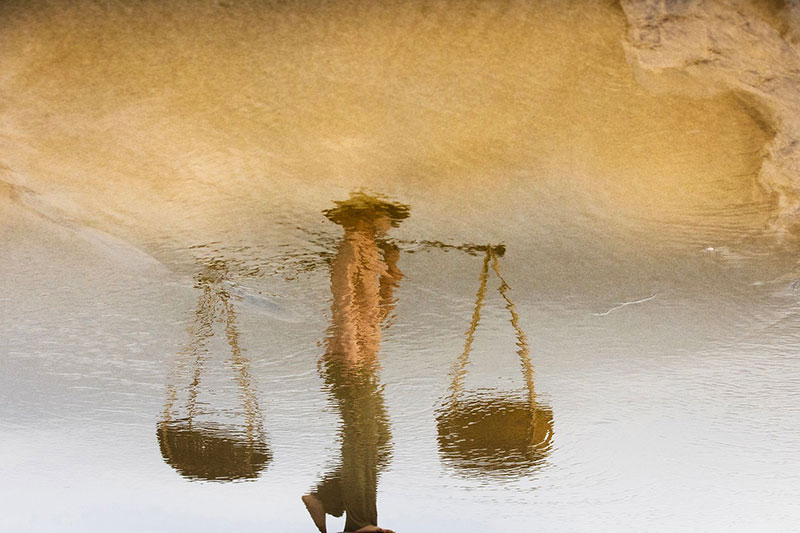 Réhahn’s recent Impressionist photographs in Vietnam are a nod to the aesthetics embraced by Impressionist and Post Impressionist painters. From the soft lines of an image reflected in water to the bright tones of pastoral landscapes, photographs such as “Echo”, “Impression”, and “Golden Field” are inspired by the harmony and transient spirit of nature, things that the Impressionists also held dear.

Read on to learn more about the history of Impressionism and how it is still inspiring contemporary artists to this day.

The History of Impressionism in Fine Art

Impressionism began in France in the late 1800s. While the soft lines and subject matter of Impressionist paintings may not seem rebellious now (in comparison to the explosion of post-modernism that came after), it was deemed radical in the 19th century. At the time, the Académie des Beaux-Arts, an academic art association in Paris, set the rules for what was considered acceptable in French art. Realism and classical subject matters were the standards. In contrast, the Impressionists were considered to be stylistically “sloppy” or unfinished. Yet, this lack of exact detail was exactly what these painters were after.

With the advent of photography as an art form and its inherent ability to recreate images with perfect realism, there was no longer the same need for commissioned portraits and authenticity simply for the sake of representation. Painters began seeking new ways to depict the world.

The Impressionists were primarily concerned with how to reflect upon their environments in a new way. They studied the effects of natural light and how it transformed the world as daytime rose and waned and seasons changed.

The invention of the paint tube in 1841 allowed artists the new freedom of getting out of their studios to paint in the open air with ready-mixed colors. This Plein Air style allowed them to quickly create studies of their subject matter as the light changed. This concept was revolutionary at the time because of the marked change in styles and techniques that Plein Air painting produced.

The Impressionists sought to capture the interplay of sunlight and color by painting as rapidly as possible with less adherence to creating an exact replica of a scene.

The focus on brighter colors and short brushstrokes resulted in works that evoked emotion through movement and shape rather than the historical and mythological narratives that were popular during the time period. These paintings were intentionally meant to be impressions of what the artist saw.

The Impressionists were also influenced by the sudden influx of Japanese items that entered France when trade was reintroduced between the two countries.

In 1867, Japan held its first arts and crafts showcase in France during the Exposition Universelle in Paris and many styles that were previously unknown in Europe became the height of style. This included using closely cropped perspectives on objects or subjects, as in Japanese print work. Ukiyo-e, which loosely translates to “pictures of the floating world,” was the name for Japanese woodblock prints that were popular during the country’s Edo Period (1615-1868). They were inexpensive to make and relatively easy to reproduce, making them one of the art world’s first forms of mass-produced art. This also made ukiyo-e a natural export product to Europe.

Degas and Monet, Impressionists, and Van Gogh, a Post Impressionist, were particularly fond of the style. Many of Van Gogh’s portraits use a tightly cropped layout to add emotion and style to his compositions. He was also fond of borrowing certain textures and motifs from Japanese art.

This perspective that became so popular in the late 1800s remains an important compositional technique in contemporary art and photography today.

Impressionism and photography intersected very early on because the first exhibition of the works of these innovative painters was held at the studio of the portrait photographer Felix Nadar in 1874. Most of the showcased works had been rejected by the Académie, yet they included paintings by some of the most important artists in art history by today’s standards – Monet, Sisley, Degas, Renoir, Cézanne, Cassatt, and Pissarro, to name a few. Even though the new painting style was mocked by critics, it soon found its permanent place in art history.

More than just a technique, Impressionism was a revolution, a philosophy, a movement, and a retreat from the industrialism of the age.

Photographers have also embraced the style through the use of softened light and blurring techniques. Several of Réhahn’s recent photographs are a homage to the ideas of the Impressionists without trying to mimic their works.

The Post Impressionist movement was led by many painters who are still considered masters today. Cézanne, Van Gogh, Seurat, and Gauguin are a few of the most well-known artists in the movement.

There is a strong cross-over between the two artistic styles. While the Post-Impressionists still valued pastoral settings, vibrant colors, and a departure from Realism, they differed from the Impressionists in terms of content.

Many Post Impressionist painters favored symbolism and structure in their works, focusing on the meanings of certain colors or images.

Van Gogh’s “The Starry Night” and his series of wheat field paintings show the importance he put into his color palette, with tones that are more pronounced than in reality.

Réhahn’s “Golden Field” focuses on the intensity of the golds and blues that are present in nature, whether in France’s fields of wheat or in the rice paddies of Vietnam.

Monet’s series of waterlilies are arguably some of the most popular paintings to come out of the Impressionist movement. They’ve been reproduced so many times that it is easy to forget the work that went into them. Monet painted his water garden in Giverny for nearly three decades. Obsessed with the delicate nature of these plants, that he imported from South America and Egypt, he was constantly trying to see them in a new way.

It is natural that this water garden also resulted in numerous works exploring reflections. In symbolism, reflections represent the idea of truth. In the Impressionist movement, painters used reflections to see the ephemeral nature of light through a new lens.

Turner, Manet, Cézanne, Caillebotte, and Cassat all explored reflections in different ways unconfined by the previous need to remain realistic.

Impressionist paintings range in theme from pastoral images to city scenes to portraits but they all share the concept of creating a sense of a scene rather than a true-to-life representation.

Post-Impressionists such as Van Gogh and Cézanne shifted the focus to the inner reality of the artists. Even their landscapes were intimate portrayals of their emotional states. Through the use of color and brushwork, we can get a sense of the feeling they hoped to portray. These master painters chose to use primary colors that filled their canvases with vibrant energy. Their use of color theory included creating balance through opposing colors such as a cool blue with the warmth of yellow or orange.

The open landscapes, peaceful pastures, and lily-filled waterways in Vietnam recall the serene images of Pissarro, Van Gogh, and Monet.

Réhahn’s latest artworks have focused on the natural environments that are easily accessed from his home. Photographing the same scene again and again with different light, seasons and lenses transforms a specific place (like a waterlily pond or a rice field) into an artistic intention.

Réhahn sought to capture the fleeting magic of light and shadow in the natural environments around his home in Hoi An, Vietnam. The resulting work celebrates the reflective atmosphere of this time when human contact with the earth has been reduced and nature has continued to prosper.

The reflections, soft edges, and hazy light in these new photos are a sharp departure from the portraits and lifestyle photographs he’s become known for. Yet, these works are quickly becoming bestsellers. The images focus on texture, shape, and color to create an atmosphere of tranquility.

How to Use Impressionism Inspired Art in Your Space

The light and color-filled images of Impressionist and Post-Impressionist paintings and photographs can easily transform a space into a zen sanctuary. A large-scale format can help expand a space by drawing the viewer’s eye towards the natural horizon line within the work.

The colors, whether the vibrant gold of rice fields or the kaleidoscope of tones found in a sunset reflection, harmonize easily with modern or traditional decor.

The right art can create a sense of historical importance without seeming rooted in the past.

From emerald to fuschia to sky blue, the colors that characterize these images remain youthful and timeless.

Photographs from our Original Limited-Edition collections are processed on metallic paper, which gives a three-dimensional aspect to the works and honors the bright colors and painterly textures. Click here to learn more about our Original photos.

See how the photos in this article can transform your space with our Online art placer!